I've realized that if you want customers to see value in your products, you have to tell them your story.

So I help entrepreneurs, sellers, and marketers grow their businesses by developing a persuasive story together with the skills they need to share it with the world.

Discover the system to a persuasive message that gets customers interested.

The arc of the story is born from the shape of the structure that stories have.

And it’s a fundamental part of any story.

Especially since every story has 2 parts.

On the one side you have the 5 key elements that make it a story.

And on the other, you have the order in which these 5 elements come together.

Because it’s not enough to list them, there has to be a relationship between them.

That’s why the order in which you mix them is important. Because the way they come together creates the structure of the story, also known as the The Arc Of The Story.

But, you don’t need to worry about getting it right.

This order is not random and it follows a clear structure that repeats over and over in every story.

The Arc Of The Story (Story Arc)

The Arc of The Story is based on the plot of the story and it’s split into 3 main parts known as Acts.

The Beginning, the Middle, and the End.

It’s here where the Exposition happens, this is the part where 2 key elements of the story are introduced.

The Setting, which is what tells you the time and place where everything will happen and the Characters that are going to be taking part in it.

Think about the beginning of every movie, first you see where the story takes place, whether it is in the future “In A Galaxy Far Away” or 500 years ago in Europe.

With the Setting established, the Characters are introduced, one by one you get to know what kind of person they are, their internal personas, their relationships with the others, and even internal conflicts.

Then suddenly, something happens that changes the state of peace. The status quo is rocked by the introduction of this element.

The element that signals the arrival of Act 2.

The Middle is marked by the introduction of the Problem.

The Problem is something that happens that changes the status quo, it alters the balance established in the Exposition.

And this conflict takes place around the main character of the story, known as the protagonist or the hero and it’s driven by the opposite character called the antagonist or villain.

The Middle is the main part of the story, where we spend the majority of the time. This is because here the tension is consistently increased.

This is called the Rising Action, where characters are killed off, new information is found out, things get so complicated that it feels like there is no way to solve this.

Until eventually, the conflict is resolved.

This is called the Climax and it marks the beginning of the 3rd part of a story.

The Climax of a story is when the problem is resolved and finally the tension is gone.

This is the last part of the story and it lasts about 15% or less.

Here, the characters manage to achieve a new state of peace in their world, allowing them to continue on with their lives.

First, what is called the Falling Action happens, which is the way in which the tension is decreased in the story once the problem is eliminated.

And then finally, we have the Resolution.

The Resolution is the ending part that defines how the new world looks, the “happily ever after.”

But, something important also happens in Act 3 and that is the Theme becomes clear. It’s at the end of the story that the main message is revealed to us.

This means that your story should look as follows. 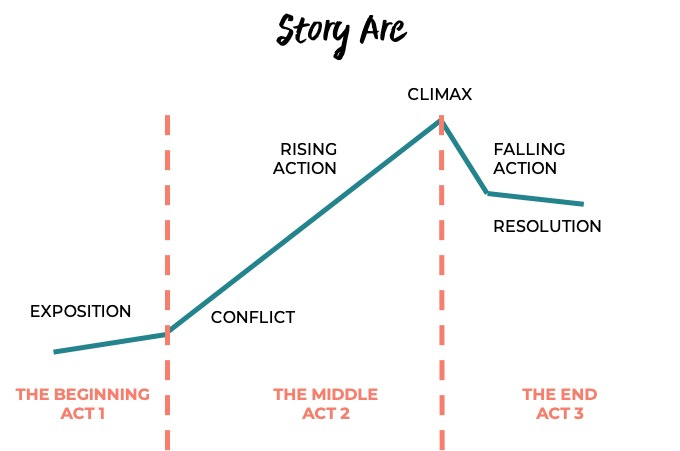 Now you see why although it’s crucial that all of the 5 elements are in the story, the order in which they are introduce matters just as much.

But, there was one element though that wasn’t mentioned in any of the Acts, the Plot.

That’s because the Plot is the main concept of the story upon which the Arc of The Story is built on.

These are sort of types of stories defined by the Plot.

And according to Christopher Booker, there are 7 types of Plots: from rags to riches, overcoming the monster, the quest, voyage and return, comedy, tragedy, and rebirth.

How Is The Arc Of The Story Related To Your Business?

The arc of the story gives you the structure your story must follow.

It may feel a bit overwhelming with all the concepts and elements so let’s simplify it.

When you are putting together stories all you need to do is focus on answering 3 questions.

In other words, the conflict, the climax, and the resolution.

Everything else will come out by default because the story forces you to put it together.

Great! All you need to do is ask one of your customers the 3 questions above.

Hi Mike, can you please tell me the following:

Put it all together and voila!

You have a very compelling story that other customers with similar problems will connect with, allowing them to see how their lives will be better thanks to using your product.

Take a look at the messages around your business, can you turn them into stories?

PS: If you know somebody who is working hard to grow their business, feel free to send them this post.

Struggling To Explain Your Business?

The 3 Problems You Need To Solve For Your Customers

The 3 Problems You Need To Solve For Your Customers

The 3 Types Of Customers You Need To Be Thinking About

The 3 Types Of Customers You Need To Be Thinking About